LHC schedule can be found here

Slides from our morning meetings here

Final year of Run 2 - another production year. Things are going well despite there still being something at 16L2 - see luminosity plots for the latest. The problem at 16L2 has become known as the Gruffalo - still not fully understood.

An ultimately successful production year somewhat hampered by an accidental air ingress into the beam vacuum in sector 12 (location 16L2) during the preceeding Christmas technical stop. 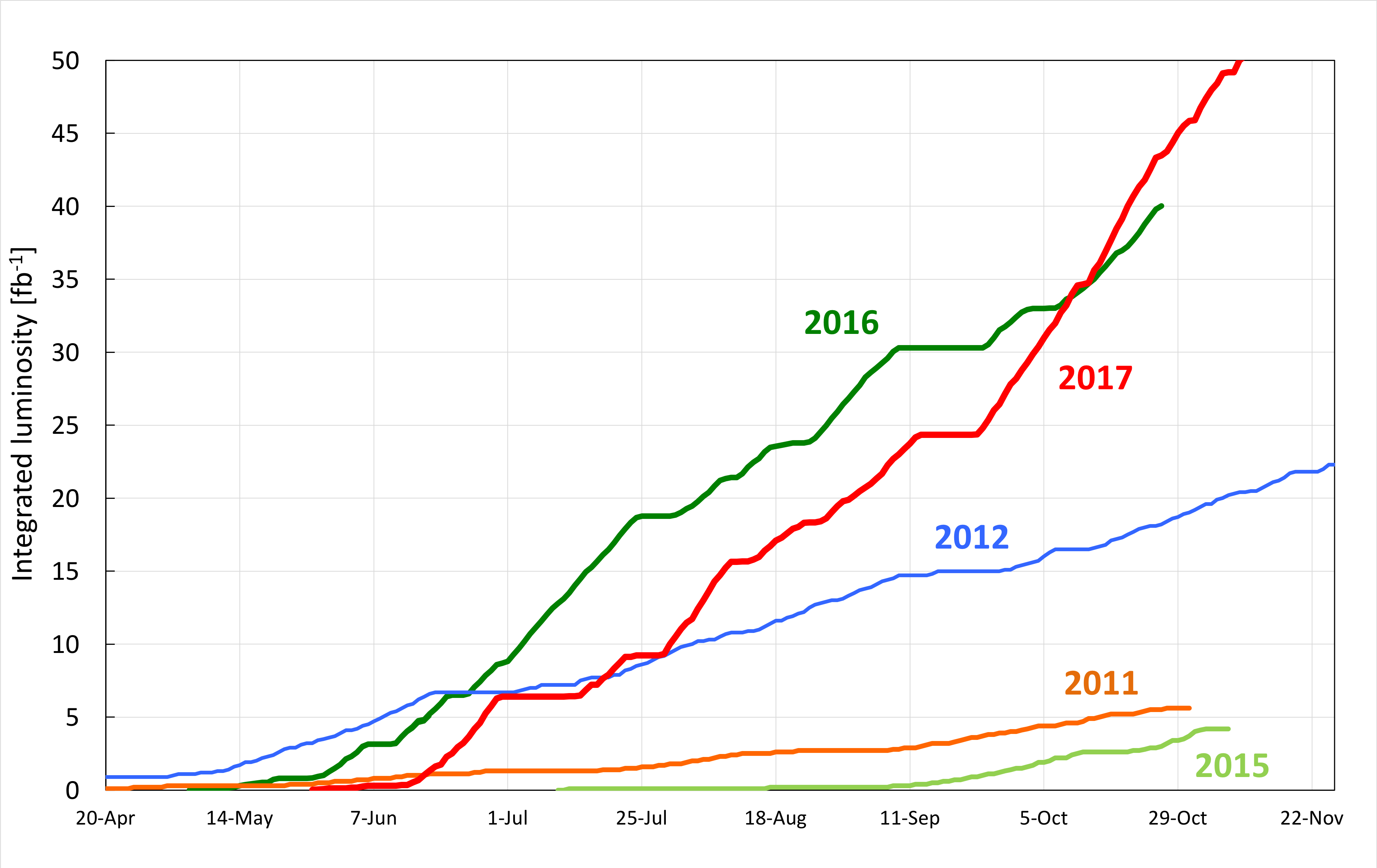 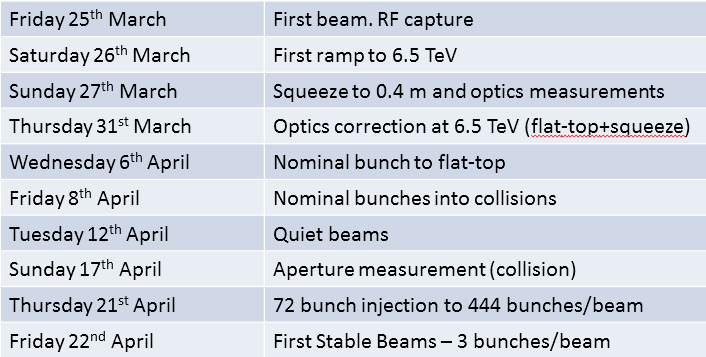 Progress has been good. Squeeze to 40 cm performed, optics measured and corrected. Experimental dipoles (LHCb and ALICE) on, separation and crossing-angle bumps on at injection and in the ramp. Collimators set-up at 450 GeV. System commissioning progressing well.

First ramp to 6.5 TeV and into the squeeze.

First Stable Beams (3 on 3 bunches). Total beam commissioning time 8 weeks 3 days - still a lot of details to sort out but looking good so far at 6.5 TeV.

First injection Sunday morning, beams around both directions without too many problems. Followed by capture, RF and instrumentation set-up - both beams ciculating in reasonably good condition by the end of the day.

The high voltage tests yesterday looked fine. The main dipole magnet circuit of sector 34 now needs to be requalified for operation at 6.5 TeV - this should take around 2 days. Another couple of days are then required for final interlock tests with the machine fully available before we can go for beam.

The attempt to burn away the short yesterday afternoon appears to have gone well. To be confirmed with high voltage tests today.

Sector 45 is finally trained to the required level for 6.5 TeV operation after around 50 training quenches. Machine checkout continues to stress test all systems in preparation for beam.

However, we still have a short to ground in sector 34, almost certainly due to a small piece of metallic debris in what is now a well established location. An attempt will be made early next week to vaporise the offending object by injectly a current pulse locally. 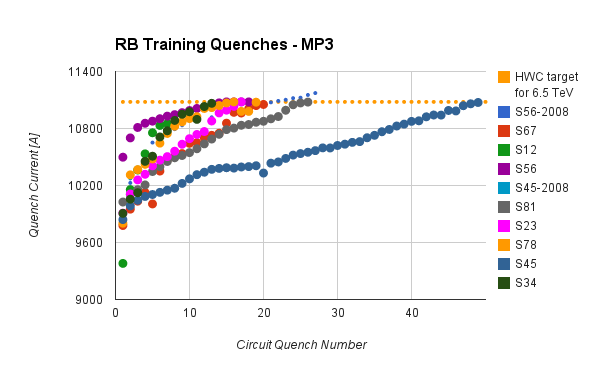 The machine checkout is progressing well. Sector 45's main dipole circuit is slowly getting there and has been trained to a current of 10,875 A (target 11,080 A).

However, during the ramp-down of sector 34 following a training quench on Saturday morning, an earth fault developed in the main dipole circuit. All protection systems functioned properly and no harm was done. The fault has been localized. Further measurements are ungoing before deciding on the strategy to be adopted but there will be certainly be some delay to programme.

Training still ongoing in sector 34 (very nearly there) and sector 45 (taking longer than expected - see plot below). We will not put beam in until all sectors are fully trained to 6.5 TeV. This may well push first beam by a couple of days. 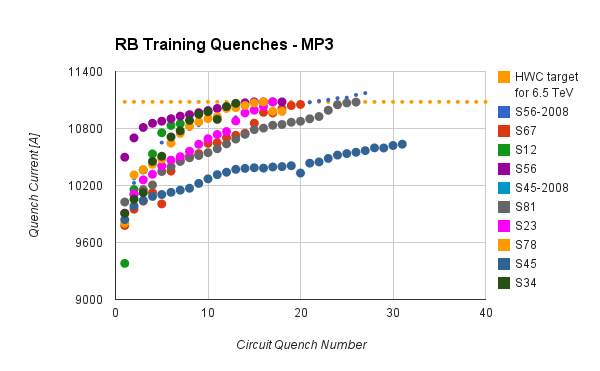 Start of beam commissioning now scheduled for Wednesday 25th March (at the earliest!).

The sector test is ongoing. Beam has been injected in both directions. The clockwise beam has made it through ALICE and sector 23, the anti-clockwise beam through LHCb and sectors 78 and 67 to the beam dump in point 6. Usual mix of problems to solve but so far things look reasonable.

5 sectors now at 6.5 TeV. Sector 23 should be finished with one more quench, sector 78 has just started training, and preparatory tests are ongoing in sectors 34 and 45. 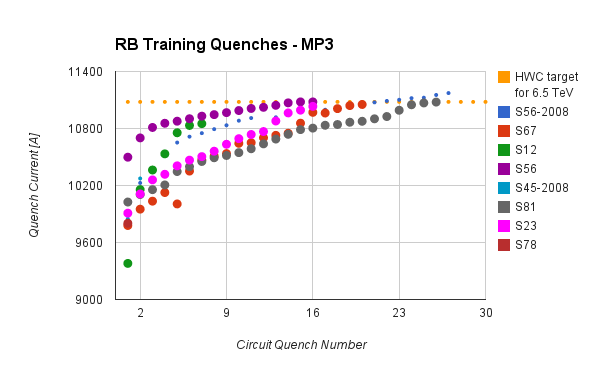 Steady progress with powering tests and quench training of main dipoles (see below). Three sectors are now fully trained to 6.5 TeV. One is in progress, the rest will come soon. Updated schedule has first beam on 23rd March 2015. 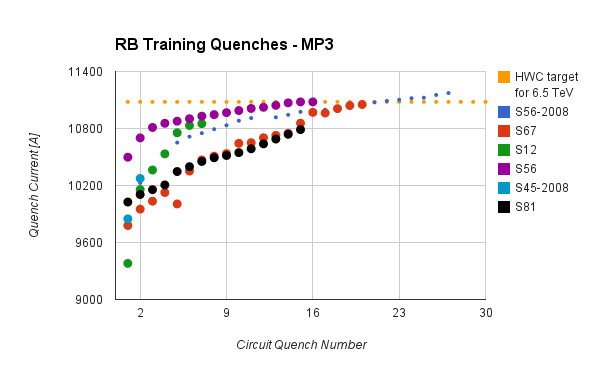 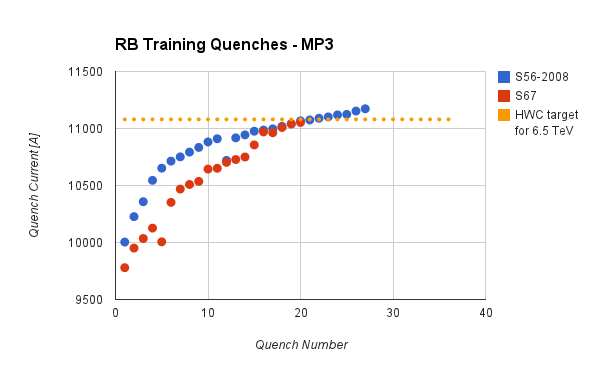